Inner wisdom doesn’t get sh*t done! Does it? 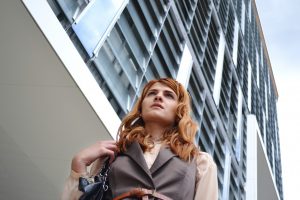 She’s a gorgeous woman in her early forties. Successful in her managerial job, with two cute kids and an equally ambitious, high-achieving husband.
Busy lives.
And now she’s almost broken her back.
She can hardly move.
It didn’t start like that, obviously. It started with a nagging feeling around her lower vertebrae. Reduction in her resilience and energy sneaking up on her.
Which made her push harder. Willing herself to get the same stuff done that she did when she was in her full power.
And she did.
For months and months. While her back grew more painful, her energy levels reduced, her temper shortened.
Until it all snapped.
For a moment there, she thought she was paralyzed. Nothing worked. No legs to carry her. Panic.

Now she’s home sick. Months of rehabilitation have taken her to this point: constant pain and the realization that this could well be a turning point in her life. Something needs to change. This physical crisis is telling her to take a good hard look at herself.
Where had she been running? What had been the purpose? Had she been valuing the right things?

Mindfulness is helping her reconnect to her body. It feels uncomfortable, unfamiliar. The mind is so used to being in control. It tells her to just get on with it. To not be a wuss. It makes her feel guilty about spending so much time sitting at home doing nothing. So she’s looking for ways to make doing nothing have a purpose. Until her back gives out again and makes her listen. Stop. Sit. Do nothing.
Mind goes crazy!

We talk about inner wisdom. What is it, anyway? It’s not the mind. The thinking mind only knows so much. Moreover, it is rooted in fear. Fear of change, fear of loss, fear of lack, fear of failure.
It wants control, security, assurance. It wants to know.

But right now, there is very little to know. The body needs to heal, and it will. We are self-healing creatures, if we just trust those subconscious processes.

The mind, though, can’t stand not knowing! It doesn’t do trust, it wants proof!
It’s been taught that in order to reach a target, you need to have a framework, goals, subgoals, a timeline.
This is, however, not how healing works. Not how the soul rolls.

So there’s constant push and pull.

Wisdom is not about proof, not about knowledge, not about a tried and tested skillset. It’s a whole different ball game. It’s about opening up to the field of infinite possibilities – which is only accessible in the present moment, not in the stories and scenarios the mind creates about past and future.
It’s about opening all the senses (including the sixth!), tapping into intuition, realizing our subconscious mind ‘knows’ infinitely more than our conscious mind.

She’ll get there. Her mind is putting up a fight. But wisdom is patient.

Do you recognize (parts of) yourself in this woman?
Do you feel your ambition, your pushy power, your thinking mind, your goal-driven left brain has taken you so far and can take you no further without paying a very high price? Is your inner wisdom knocking, asking for its fair role in the driver seat? But do you have only a faint idea of how to access it, let alone how to freaking trust it?

Let’s talk. In a f r e e 30-minute clarity session I can usually pinpoint exactly what we need to work on. And we can both find out if we’d be a match.
Let’s awaken the wise woman in you! It’s time!
Book your call here.