How weird are you allowed to be? And your clients? 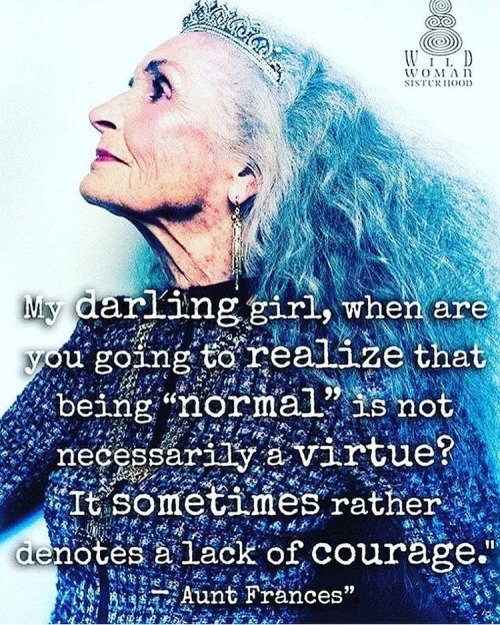 Have you ever considered yourself abnormal? I certainly have. Ever since I was a little girl. I was reminded of this – and inspired to write about it – when I saw this meme on Facebook. I posted it in my group to remind all those beautiful wise women that they are perfect just the way they are. But when I started to think about it more… I realized that this is easy to agree with yet difficult to really fully live.

It is one thing to be o.k. with dressing a little bit eccentric and individual. Or give your hairdresser permission to use a wild colour on you. Or to have a quirky taste in music, or to admit that you like soaps and trashy novels.
That’s all just surface stuff, right? Pretty safe to show and share.

But is it also o.k. to have a completely opposite idea of how your job should be done, and just do it? To have and live by standards that are unconventional in your trade – thus maybe alienating your colleagues and perhaps getting expelled from your trade association?
Is it o.k. to not want to live in a house anymore?
Is it o.k. to be depressed most of the time?
Is it o.k. to not be over trauma and maybe never be – and still be ok.?
I can go on and on, ask you a million questions about you, come up with a gazillion examples of maybe not so ‘normal’… and is that o.k.?

I was at a concert the other night and while I was waiting for one of the rooms to open, a gentleman started a conversation with me. You know the kind of conversation – about the venue, the artists, other concerts he’d been to…
Small talk.
Which I’m bad at (aka introversion). While I heard the gentleman seemingly effortlessly bring up one subject after the other, I just felt my mind drift off and heard myself go silent after every few sentences.
I try, but my internal system is going: ‘I don’t want to do this. Leave me alone.’ And I feel bad, so I try a little harder to keep the conversation going. And feel relieved when the doors open and we can go our separate ways. What is wrong with me??

Do I really accept that I’m sometimes bad at keeping conversations going? That it tires me, that I don’t really want to, that I just don’t see the point? Can I ever stop, will I ever stop making the effort, just because I’ve been taught it’s the thing to do? Because I’ll look bad if I just shut up?

It’s not that I think I should stop making an effort. That is not what I mean. Sometimes it’s o.k. to try and fit in and stick to social rules we have accepted as a society.

But I’m touching at the heart of the matter here.

We’ve been taught there is a ‘normal’, because we are social beings. Not belonging is perceived as a serious life threat. If we’re too different, our environment may no longer accept us; it may cast us out and we may not survive that.

So from a very early age, we learn to fit in, to be ‘normal’.
Your parents may have taught you to fit in, to blend in, to adapt, to act normal, to go with the norm. And you may have felt they have smothered your individuality, and tried to mould and model you rather than honour your uniqueness. But maybe you can soften a little towards them, understanding that most parents have a deep (though often unconscious) desire to have their children be accepted and belong.

Because that way, they’re safe.

Mind you, some of the things your parents and educators wanted you to change or repress may simply have been traits that differed too much from how they were. In my case, my extraverted parents thought I was too shy. My high energy sister who was always full of ideas on the other hand, was way too much for my perfectionist and more low energy father. So for both of us, perfectly normal traits became things of shame, that we tried to alter.

So let me ask you: can you really accept you exactly as you are? And express the complete truth of who you are? Even if what you know about yourself is not considered ‘normal’? The deeper you dig, the more you may find that you have not completely accepted, that you’re still trying to change or gloss over.

Start with that, be kind and accepting about that. Having a desire to belong is human. Still, there is no need to be liked by everyone. Be the first person who really loves you exactly as you are. Warts and all. After that, the rest will follow – not all, but that is perfectly o.k.
And this is the first and main thing you can do for your clients/patients/students as well. Be completely accepting of whatever they come into your office, consulting room or classroom with.
Model that unconditionality for them, so they can slowly learn to be as unconditional in their love for themselves.